To keep apprised of current activities please go to the the John Hope Franklin Center for Reconciliation. You will find Curriculum Resources and more information about the 100 year anniversary rememberance of the Tulsa Race Riot.

A Report by the Oklahoma Commission to Study the Tulsa Race Riot of 1921 February 28, 2001 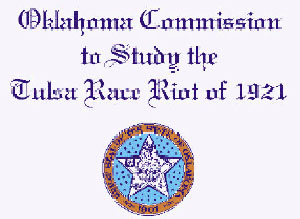 Pursuant to House Joint Resolution 1035 (1997), as amended, I have the honor to transmit here with the Final Report of Findings and Recommendations of the 1921 Tulsa Race Riot Commission. The report includes the commission's findings on each specific item assigned it by statute, and it also explains the methods and processes that led to those findings. In addition, the commission has exercised the option, granted it by law, to make recommendations concerning reparations related to the tragedy.

This Commission fully understands that it is neither judge nor jury. We have no binding legal authority to assign culpability, to determine damages, to establish a remedy, or to order either restitution or reparations. However, in our interim report in February, 2000 the majority of Commissioners declared that reparations to the historic Greenwood community in real and tangible form would be good public policy and do much to repair the emotional and physical scars of this terrible incident in our shared past. We listed several recommended courses of action including direct payments to riot survivors and descendants; a scholarship fund available to students affected by the riot; establishment of an economic development enterprise zone in the historic Greenwood district; a memorial for the riot victims.

In the final report issued to day, the majority of Commissioners continue to support these recommendations. While each Commissioner has their own opinion about the type of reparations that they would advocate, the majority has no question about the appropriateness of reparations. The recommendations are not intended to be all inclusive, but rather to give policy makers a sense of the Commission's feelings about reparations and a starting place for the creation of their own ideas.